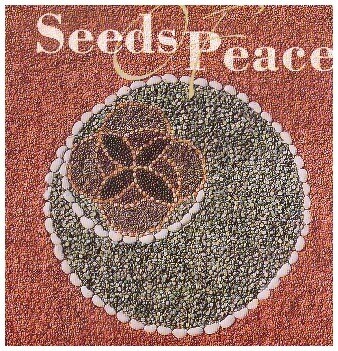 Every day
we pray
to plant a seed of peace,
so peace can come to stay!

Sometimes it feels the world's too big
for people small as we
but a seed deep in the earth
can grow a mighty tree!
Like a thought of truth and love,
so simple yet so strong,
planted deep within our hearts
can burst into a song!

In the twinkling of a star
like a diamond in the sky
there's a promise from afar
though we sometimes wonder why.
Yet if we share a dream
of a world where all belong,
where voices join as one,
we sing a mighty song!

There's a shield of angel wing,
a star to guide, a song to sing!"

This song comes with so many levels and so many stories. It started with a small song, the chorus, that Jennifer Ferguson wrote and at one occasion performed together with children for Nelson Mandela.

It grew with verses and a bridge and a recording together with street child and South African Idol and "national darling" Frida Darvel. Documentaries were made on her beautiful but deeply tragic life-journey and the project "Seeds of peace" was launched by a group of committed artists; Artists Against Abuse.

Whenever there was a child in the room Mandela would bow down and address the child first. Sometimes he would sing a song for them. This is well documented and recorded. He would sing his version of "Twinkle, twinkle little star". It is not like the one most of us know and its origin is unknown to me. Anyway, by a mere coincidence (?!) the melody fitted perfectly as a bass line with the song "Seeds of Peace" and is included in the score.

So this little song has grown into a grand one.

In this one we join a chorus of street children, Nelson Mandela and the stars above singing for the peace to come to stay.

Listen to a recording here!

Order printed copies here, to have delivered by regular mail. Or even better; get it immediately to you own printer by ordering now from our Score Store!