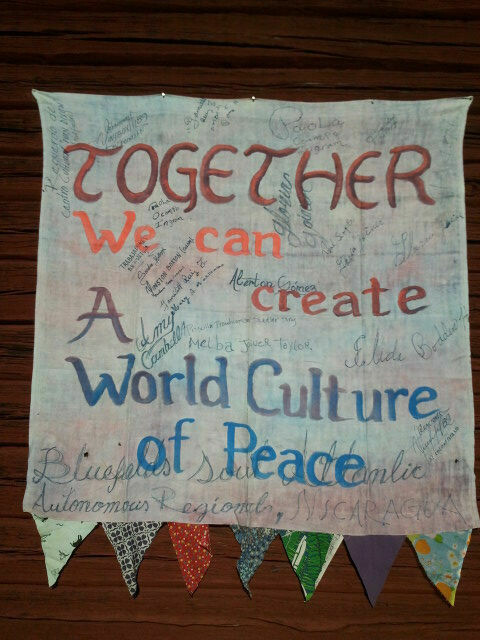 We are creating together!

What? Let’s get our act together!

When? Time is now and forever!

Where? It’s here as it’s everywhere!

Why? It’s this or catastrophe!

How? In Jah lies our unity!

The story of this short and simple song is quite long and complex – but maybe still in its infancy. It starts in the mid-eighties in Stockholm when I had been invited to a school to sing South African songs with students studying to become social workers. Afterwards they discovered that the school owned stocks and shares in companies with investments in then apartheid-South Africa. After a short but vocal time of lobbying by the students the school board conceded and sold the shares. In a fine gesture they gave the money earned on the sale to the students to be used in a way that best would forward the South African struggle. The students called me and asked for advice on how to use it:

“Should we bring up a South African student?”

“How ‘bout bringing a whole choir?” I responded and a year later, after enthusiastic work by the students, the “Pula Choral”, a choir of Students and Mine Workers from Welkom and Bloemfontein landed in Stockholm. Their three-month tour in the height of the insurrection was an event that no one who experienced it will ever be able to forget.

One of the songs they left behind was the traditional song “Malizwe”.

A couple of years later I travelled with the song-group Gondwana on a tour to Cuba and Central America with a repertoire of World Music. We ended up in Bluefields, a town on the Nicaraguan east coast with a very special history. Twice in the history of slavery the slaves managed to break loose from their ship and throw the crew overboard. One of the ships was “Amistad” whose story has been told by Spielberg in the film with the same name. The other ship drifted ashore where Bluefields now is situated, its inhabitants mainly descendants of the Africans who refused to become slaves in the New World.

There we gave a concert at a festival together with local musicians. When we sang “Malizwe”, intended a cappella, the band on stage heard the easily recognised sounds of their African roots and started to accompany us in their own Reggae idiom. A wonderful new fusion happened as the Latin American spices enriched the African treat with new flavours. Above us on stage hung a beautifully decorated banner made for the occasion, (see picture) which is now hanging in my work-room;

“Together we can create a World Culture of Peace!”

The words fitted perfectly to the song and with the new rhythms added we had a beautiful new creation that we brought back to South Africa to record. A song that had travelled in the same tracks, but the opposite direction, of the old Triangular Trade and with a reverse message of reconciliation and restitution.

This arrangement comes with the solos transcribed. Available is also a version without the solos.

Listen to the song here: